If your child’s tooth has come out too soon because of decay or an accident, it is important to maintain the space to prevent future space loss and dental problems when permanent teeth begin to come in. This is done in cases where the permanent tooth will not be growing in for many years. 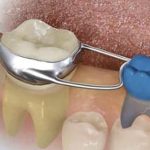 A band-and-loop maintainer is made of stainless steel wire. The maintainer is held in place by an orthodontic-type band around a tooth or a crown which is adjacent to the tooth that has been prematurely extracted. A wire loop attached to the band or crown extends into the space and touches the tooth on the other side of the space to hold both teeth in place.

More about the Band and Loop Appliance 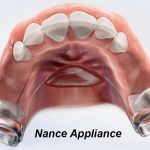 The Nance Appliance also called the TransPalatal Arch (TPA) appliance is used in situations where premature bilateral loss of maxillary primary teeth has occurred. This is a type of space maintainer used in the upper jaw when primary molar teeth have been lost prematurely on both sides of the dental arch.

The Nance has bands that wrap around the molars and a palatal arch wire that has an acrylic button attached to it in the pre-maxillary region. This button acts to keep the molars in place and hold the arch length.

More about the Nance Appliance.

The Lower Lingual Holding Arch (LLHA) is a fixed (non-removable) appliance that is cemented to the lower first molars connected by a wire that runs along the inside of the lower teeth. The LLHA acts as a space maintainer to keep the molars from drifting forward and to prevent them from blocking the space where the permanent teeth will eventually erupt.

The LLHA is used to preserve and create space in the mandibular (lower) arch and to aid in uprighting of the molars. The appliance is placed on the lingual (tongue) side of the mandibular (lower) teeth.  As the lower baby molars are generally larger than the permanent teeth that will succeed them, the LLHA helps to utilize this space to the patient’s best advantage.

This appliance is most commonly used with a head gear for bite correction.